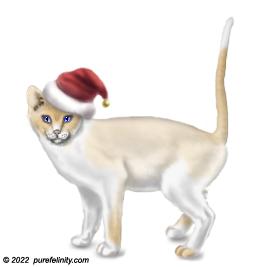 General: Lesse had sailed out to the Caribbean Isles, a place she was very familiar with, being the main breeder of the Caribbean Shorthairs. What she didn't know is that a bunch of ferals had decided to join her boat ride, and play with her Caribbean Shorthairs. After Lesse's vacation, she didn't seem to notice her cat's numbers had doubled, or that there was kittens in the cabinet, or on the table, or everywhere for that matter. This was a common sight for Lesse, she usually had about 200-300 cats. It was only when she felt something wiggle in her shirt, did she look down and notice a tiny kitten staring up at her with big eyes. "Where did you come from?...I haven't planned any litters lately" She then saw the ferals jump out of her boat and pieced two and two together. Originally, these kittens were going to be sold, but seeing they had the same mischievous spirit as the Caribs, and the wild side of the ferals, she realized these kittens were special. She called them Arabian Shorthairs, named similarly to the Caribbean Shorthairs, and because she liked Arabian horses. And thus, the Arabian Shorthair was born. Although not all of the Arabian Shorthairs kittens are tame, some were too feral and joined their feral ancestors in the wild. Overall, Arabian Shorthairs are a small, cobby, usually bobtailed cats. Their most unique feature is they always look like an older kitten to a yearling, they always look young. They are shorthair, with thick fur and ear tufts, they have the look of a wildcat kitten. They come in all colors. Personality wise, they bond very strongly with owners and are always under your feet, they like to hide in the weirdest spots and love to cause trouble. In the wild, Arabian Shorthairs are found almost anywhere, although commonly in the mountains and hills. The Arabian Shorthairs are fairly rare, because most of them are either in the wild or in Lesse's cattery.
Breed creator: player #155368
Date added: 2019-04-01
Body type: semi-cobby (6)
Body size: small (6)
Head shape: rounded wedge (11)
Ears: medium size, straight (11)
Nose: medium length (12)
Eyes: oval (12)
Eye colors: any
Coat: shorthair, or shorthair satin
Tail: any (bobtail is the most preferred, tailless is the least preferred; this does not affect shows)
Legs: normal
Colors: All colors and patterns allowed