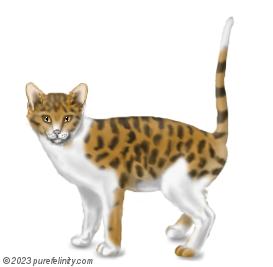 General: When the 1976 Dangerous Animals Act was passed in the U.K., many 'big cat' owners decided to free their 'pets' into the countryside, rather than pay for a license to keep them. Some survived, breeding with their own. Others survived and began to breed with the larger among domestic kitties. As the genetic barrier started to break down, more hybrids were being created. The result is now known as the 'Beast of Boncath'. I had the pleasure of owning one for a while, and if you decide to keep them, you will be rewarded with great affection and loyalty, but never forget where they have come from. They will always be wild at heart.
Breed creator: player #35433
Date added: 2009-11-01
Body type: semi-cobby (9)
Body size: large (20)
Head shape: rounded wedge (14)
Ears: big, any (15)
Nose: medium length (13)
Eyes: oval (7)
Eye colors: any
Coat: any shorthair
Tail: normal or bobtail
Legs: normal
Colors: any tabby

Current number of Beast of Boncath cats in game: [27]