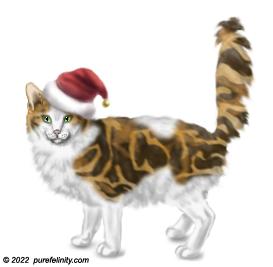 General: In the early 1800?s, a French composer owned a young female cat, named Madeline. Madeline was his muse, his inspiration. Her owner had written many songs dedicated to her, and every one of them was just as beautiful as she was. While her owner would write music, she would sit atop his piano, and meow for his attention, which, without fail, she gained. The composer knew that in time, he would like to breed her, and eventually he did. The sire to her kittens was equally gorgeous, his point and folded ears complimenting her strait ears and champagne coat perfectly. They were nearly identical in traits, and inseperable from the time they had met. Madeline had gained a new love, a feline love, but would still always return home to her dear master. Over time, Madeline and her mate had many kittens, all with the same traits. As Madeline aged, her owner decided that, in remembrance of her, a new breed would be named. The name had to be as gorgeous as Madeline and her mate, and mean something equally beautiful, that described how vivid and great a life she had lived, and there, the Chanceux was made. In French, Chanceux means luck, and Madeline was just that to the Composer, and to her mate.
Breed creator: player #55179
Date added: 2006-07-13
Body type: semi-cobby (7)
Body size: big (15)
Head shape: rounded wedge (15)
Ears: big, any (12)
Nose: medium length (16)
Eyes: oval (8)
Eye colors: any
Coat: Shorthair, and longhair, with or without rex 1, 2, or satin
Tail: normal
Legs: normal
Colors: All but solid white. Ghostmarkings and rufusing not penalized in shows.