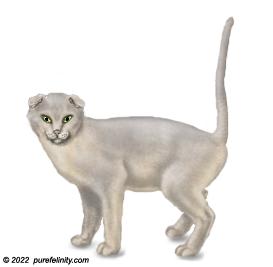 General: The Flamedance is a rare breed of cat found in mountainous regions throughout the Americas. They have only recently been recognized as show cats by various associations and have now been picked up by breeders all around the world for their stunning intelligence and ever-changing personalities. Their name is said to come from an ancient legend of fearsome mountain cats who could call forth searing flames from the earth at their whim. They were known as destructors capable of burning entire villages as well as guardians for travelers lost in the mountains. It is said that their behavior is still as unpredictable as a burning flame.
Breed creator: player #79417
Date added: 2008-02-01
Body type: semi-foreign (13)
Body size: medium (10)
Head shape: oval (8)
Ears: medium size, any (6)
Nose: medium length (15)
Eyes: almond-shaped (18)
Eye colors: any
Coat: any shorthair except wirehair
Tail: normal
Legs: normal
Colors: Allowed in all colors and patterns except solid white (white bicolors are allowed), but rufusing is not allowed.