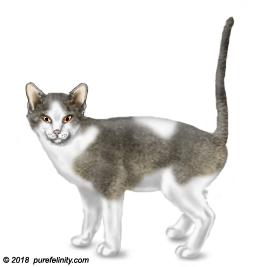 General: Originating in India, this breed first came about during the unplanned breeding of a stray tabby cat and a Mithul. The resulting litter was born with the sleek, soft coat and graceful lines of the Mithul but the tabby markings of the stray. Upon seeing the litter's beautiful markings, people started outcrossing, creating the Hindustani. Similar to the Mithul in nature, but with a far wider playful streak, the Hindustani was at first prized among the nobility and priests. However, when they realised the Mithul were dwindling due to the creation of the Hindustani, they dropped the new breed and returned to the Mithul. The Hindustani was then accepted into the hearts and homes of the commoners, a place where it flourished.
Breed creator: player #5405
Date added: 2007-09-01
Body type: semi-foreign (13)
Body size: medium (13)
Head shape: oval (8)
Ears: big, any (14)
Nose: medium length (9)
Eyes: almond-shaped (17)
Eye colors: any
Coat: shorthair or longhair, satin
Tail: normal
Legs: normal
Colors: Black, chocolate, cinnamon, red and their dilutes in solid, siamese, burmese or mink. Must have agouti. Bicolour, van, harlequin, and mitted allowed. Silver and golden allowed. No solid white.