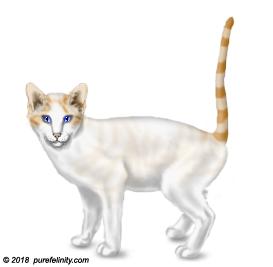 General: The Lynahnx (Ly-nynx) is a large species of wild cat that is characterized by their slender build, small ear tufts extending from each ear tip, large eyes, long legs and tail. Weighing up to 30 lbs., they are larger than the average sized cat. They have short, soft fur with variable colors with the most common colors being black, chocolate, cinnamon, and gold. With distinctive tabby markings along the entire body. These cats inhabit dense woodland forests in mountainous regions. Lynahnxs have short but very thick fur to survive long and cold winters. Their fur becomes much lighter during the spring and summer months when the weather is warm. Individuals that inhabit the colder areas have much paler, diluted colored fur with some individuals having splashes of white or rarely even being solid white. These are usually the ones that live at higher elevations with much colder climates. Personality wise, these cats are shy and very elusive and avoid people. They are untameably wild, but not aggressive or threatening toward people and will only attack when threatened. Like most species of wild felines, they are solitary in nature, with exceptions of pairing to breed or females with kittens. Unlike most other cats however, they like water. They don't mind swimming on a hot day or catching fish. Creating the Lynahnx was inspired by many of the real-life species of wild cats and how they survive.
Breed creator: player #157877
Date added: 2019-01-01
Body type: semi-foreign (14)
Body size: large (20)
Head shape: oval (7)
Ears: big, straight (14)
Nose: long (18)
Eyes: oval (9)
Eye colors: blue, aqua, green, grey-green, orange, yellow, yellow-green
Coat: Shorthair satin
Tail: normal
Legs: normal
Colors: Tabby required; All colors allowed. Ticked tabby and mitts not allowed