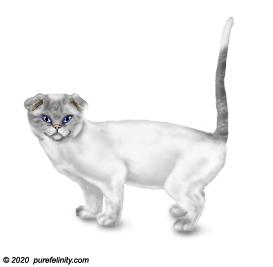 General: Originating from the coldest climates, the first Pinekins grew thick, long coats to fight against the harsh weather. Curiously, the cats would only choose to live in the pine forested regions of the mountains, and leave any other environments untouched. They developed short, munchkin legs which, along with their small size, enabled these cats to run through burrows after rabbits. Years after, when Pinekins began to appear alongside housecats inside homes, they still retained their fascination with pine trees and anyone lucky enough to have one living along side them will often see them sneaking out just to sniff the pine needles.
Breed creator: player #166898
Date added: 2018-11-01
Body type: foreign (18)
Body size: small (1)
Head shape: round (1)
Ears: large, any (18)
Nose: short (8)
Eyes: almond-shaped (18)
Eye colors: any
Coat: any
Tail: any
Legs: any; munchkin preferred (does not affect show results)
Colors: any