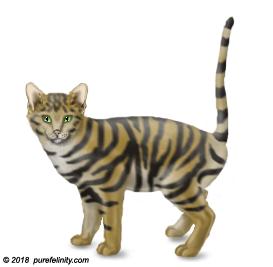 General: The Scottish Wildcat is derived from the same roots as the modern European Wildcat, but having been separated when the land brige between Britain and Europe disappeared aroudn 9500 years ago, it has since evolved into a subspecies, Felis silvestris grampia. The Scottish Wildcat is around the same size as a normal domestic cat, as the large gene was effectively wiped out by Victorian museums hunting for the largest specimens. Although at one time they were common across much of the British Isles, they are now only found in the Scottish Highlands, and the population is still decreasing. Scottish Wildcat have a thick, silky coat, with a delicate golden sheen. It is longer than that of a standard domestic shorthair, particularly in winter, but does not officially count as semi-longhair. In recognition of this inconsistency, the Scottish Wildcat is accepted in either short or longhair on purefelinity. Wildcats have a mackerel tabby pattern, and are generally black mackerel tabby. However, some cats have been observed to take on a silvery tone during the winter months, and this is recognised in the allowance of silver tabby. Scottish Wildcats are extremely beautiful, but are untameably wild, and can never make good pets - even if reared from kittens, they exhibit wildcat behaviours which a feral domestic never would. It is therefore only in places like this site where the Wildcat can be kept as a pet and shown. More information about these incredible creatures can be found here, at the Scottish Wildcat Conservation page: http://www.scottishwildcats.co.uk
Breed creator: player #7607
Date added: 2006-04-07
Body type: semi-foreign (13)
Body size: big (16)
Head shape: oval (10)
Ears: big, straight (15)
Nose: medium length (14)
Eyes: oval (7)
Eye colors: yellow-green, green, grey-green, hazel
Coat: satin, short or longhair
Tail: normal
Legs: normal
Colors: black mackerel tabby & black silver mackerel tabby; rufusing not allowed